Inpatient services are declining as outpatient services continue to grow. Over the past decade, this national trend has manifested across many types of payers and providers. However, it’s difficult to determine a definitive explanation for the shift; it is likely the result of a variety of factors.

While this may be true, it only partially explains the trend. The Medicare Payment Advisory Commission (MedPAC) indicates the rise in outpatient services and payments are due to a 20 percent increase in payments for Part B drugs and an increase in physician services being billed as hospital outpatient services. On the inpatient side, the decline in stays is mostly for respiratory, circulatory and digestive cases.

The Payment Method Development Team at Conduent recently completed a study of this trend for one state Medicaid program. We found that a similar pattern does indeed exist in its FFS and managed care organization (MCO) populations, although the number of outpatient visits did not increase as substantially. Our analysis looked at changes in the number of adult (over 21) inpatient/outpatient hospital claims and allowed amount (the calculated payment amount prior to deductions for third-party liability, co-pay or cost share) over a four-year period.

Our analysis found that outpatient claims per 1,000 member months for all payer types increased slightly over time – about 3 percent over four years. Inpatient claims volume decreased markedly over the same time period, with consistent declines until the number of claims in the fourth year of the analysis was 20 percent lower than the first year. The decline in inpatient stays over time is larger than MedPAC’s Medicare estimate (21.8 percent over 10 years). The increase in outpatient stays over time is much smaller than was seen in the Medicare population.

Note that, although there were no rate increases for inpatient visits over the four years, outpatient rates did increase. This explains some, but not all, of the relatively sharp increase in allowed amount. Both inpatient and outpatient services are paid using prospective payment systems. Our analysis also looked only at outpatient hospital claims and did not include ambulatory surgical centers. 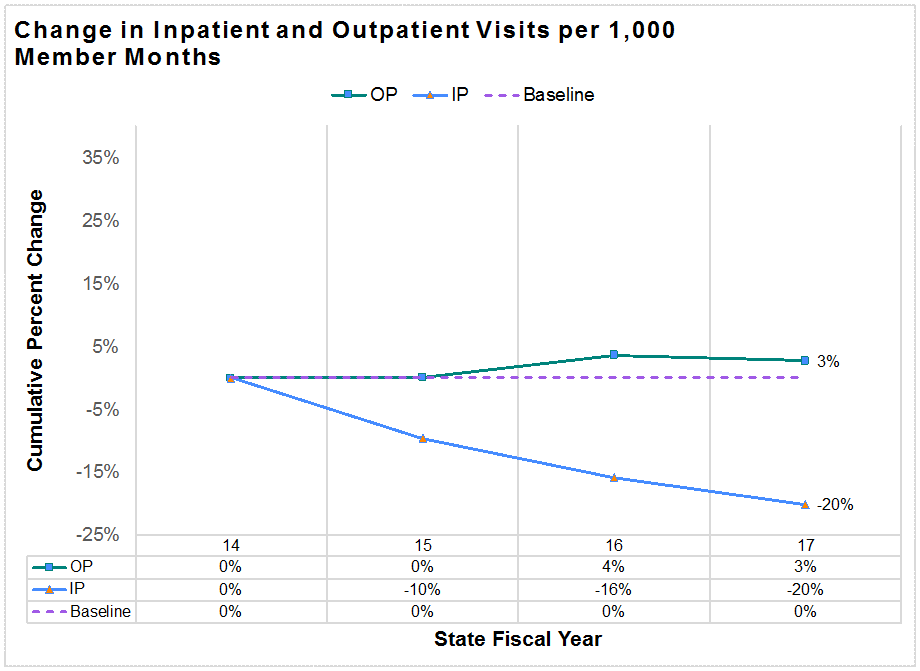 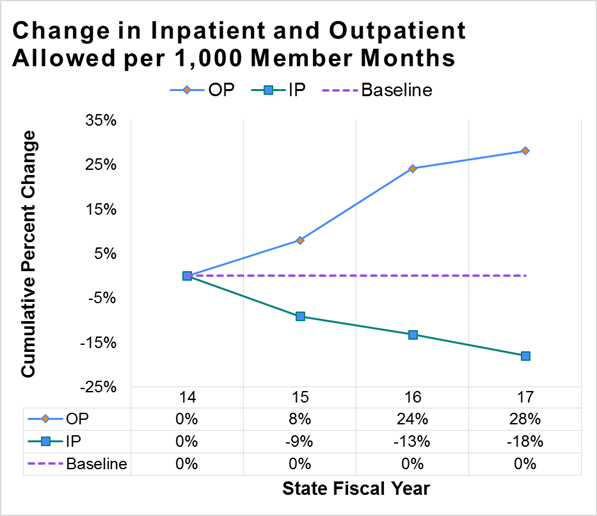 We broke down the analysis of outpatient claims further using Reason for Visit Categories based on a combination of diagnosis, procedure codes and revenue codes. This classification system, developed by the Payment Method Development team, assigns outpatient claims to 1 of 14 categories in a hierarchical manner. 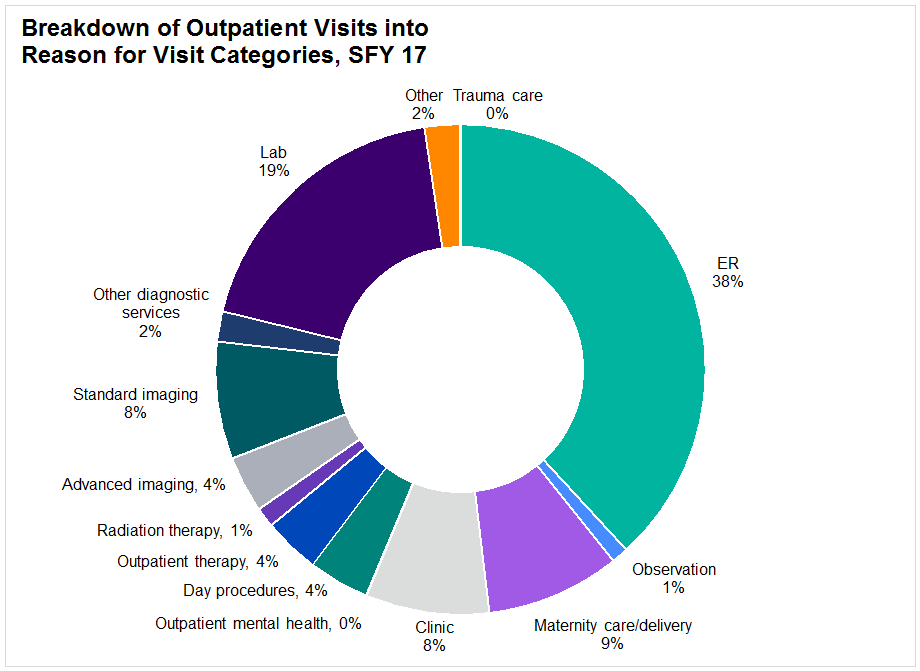 Next, we considered if the service mix trended toward more expensive services. However, we concluded that there is no consistent relationship between the allowed amount per service and the growth in services. The largest growth was in Trauma Care, Outpatient Mental Health, Other Services and Clinic. Radiation Therapy was the most expensive category and showed modest growth (about 20 percent) across all payers. Trauma is expensive, but relatively low-volume. The largest categories, ER and Lab, showed little to no growth.

Overall, we concluded that, compared to Medicare, this Medicaid program has seen similar decreases in inpatient stays, but significantly less growth in outpatient services:

The experience of Medicaid programs across the nation may vary; but all indicators point to a distinct trend of outpatient growth and inpatient decline. In this particular state, the decline on the inpatient side mirrors the movement seen in Medicare. The outpatient side saw relatively modest growth in the number of visits, but large growth in the allowed amount; this suggests that outpatient services, on average were more expensive and likely more complex than they had been. So it’s possible that at least some services that may have once been performed in inpatient settings were instead performed in outpatient settings, although further analysis is necessary. Again, how this trend manifests itself in a given state may vary, but it’s a national trend seen across a variety of payers.

For more information about this topic or to find out how the Payment Method Development team at Conduent can help your state address this challenge, contact Andrew Townsend at andrew.townsend@conduent.com or visit www.conduent.com/medicaid. 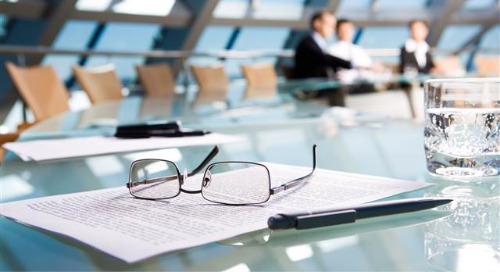 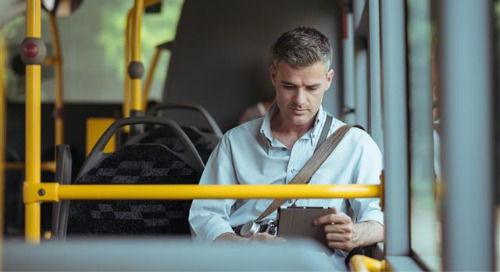 The Link Between National Disability Employment Awareness Month and Transit

At Conduent, we are committed to providing an accessible, diverse workplace. In particular, we are proud to...