In a recent video to Conduent’s LGBTQ+ employee group, I posited that June was named “Pride Month” instead of “LGBTQ+ History Month” because many in the LGBTQ+ community grew up and still live with regular messages that they should be ashamed, not proud, of who they are.

Naming June “Pride Month” is a way of reminding others and ourselves that those negative messages should be rejected and disregarded; that we all should be valued for who we are.

The impact caused by messages of shame or inferiority is undeniable, from the schoolhouse to the workplace. Pride Month and all that accompanies it serve to combat that. I started thinking about my experience and what has worked for me to feel good, even in the face of intentional or unintentional negative messages.

Walter Frye, who is Conduent’s Global Head of Diversity and Inclusion, has a short, immensely powerful piece of advice: Assume positive intent. He believes, and I agree, that with different life experiences, people often choose words or do things and don’t understand the implications of those words or actions.

Of course, some words and actions are so abhorrent that assuming positive intent is futile or even dangerous. Most often, however, I have seen that giving the benefit of the doubt allows bridges to form, growth to occur and improvements to be made.

Perhaps even more profound is that by assuming positive intent, the sting of the offense is dulled. And when that sting is dulled, shame doesn’t sink in.

I have a fairly serious role. But that does not stop me from telling one of my corny jokes or laughing at myself or with others. For one, I do this because it is genuinely who I am, and I think all good leaders need to be true to themselves. What I realized along the way is that humor was a great way to have people open up to new ways of thinking. Of course, like any tool, humor needs to be used appropriately. Behaving like a class clown would not have worked for me any more than retreating into a shell. But in the right doses, humor has been effective. A small example: For Pride Month, I wanted to wear something work-appropriate that recognized the month. I was looking at lapel pins and bought the one below because it made me smile and I hope it has the same effect for anyone who sees it, even people who might have put up a wall at seeing a traditional Pride flag pin. 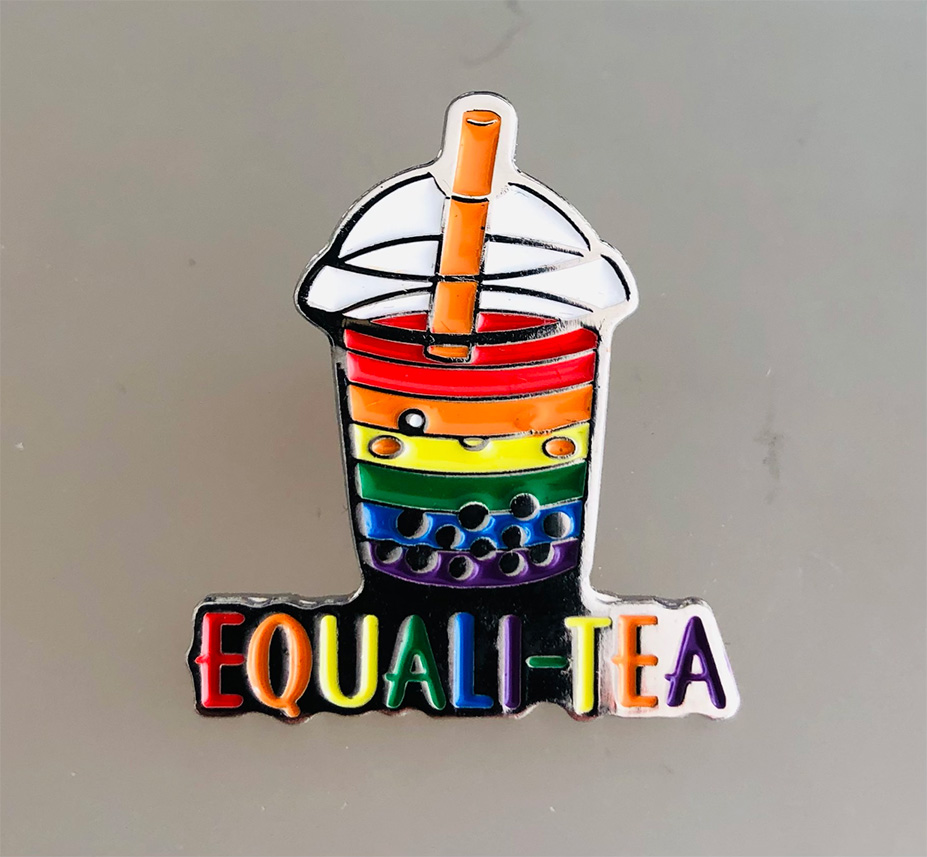 Of course, there is nothing wrong with the traditional Pride flag; this just struck me as an opportunity to engage and break down some walls. Another example: When I was young, I was uncomfortable with my lack of interest in or knowledge about professional sports. I realized that joking about my own lack of understanding was a way for me to disarm others from weaponizing my ignorance and was a way for me to quash the shame of not valuing what “all” of the guys seemed to value.

Being a good teammate

At Conduent, we talk about being a good teammate a lot. And part of being on a team is a connection with others and a shared responsibility for everyone’s success. It is so easy to get wrapped up in one’s own responsibilities. What I have repeatedly seen is that by reaching out and supporting team success, two remarkable things happen: First, bridges are built with others, and we know that people are statistically much less homophobic, transphobic, or hurtful when they personally have a bridge to someone in the applicable group. Second, helping a team to succeed triggers a different kind of well-deserved pride, which helps overcome many of the damaging messages of shame.

Working for a company that appreciates diversity

There is a lot we can do on our own, but I certainly appreciate spending my working hours at a place that has the right culture. I am proud of Conduent’s policies and its perfect Human Rights Campaign Foundation’s Corporate Equality Index score, but I’m most proud of the culture underlying those things. For example, our teams in India hosted their first “Pride Awareness Day” quiz in their Yammer community. It was designed to build awareness, inform and educate everyone about LGBTQ+ topics. Further, one of our company’s eight Employee Impact Groups, PRIDE, is hosting a discussion with Jeannette Jennings, mom of Jazz Jennings who stars in TLC’s reality series “I am Jazz.” In an open forum where our associates can all participate and learn, Jennings plans to share her perspectives about parenting a transgender child. Diverse thoughts, background and experiences create value. It’s clear that people bring their best to work when they do not have to hide key parts of their lives.

We’ve made a lot of progress as a community and we should celebrate that. My hope is that someday our progress will warrant referring to June as LGBTQ+ History Month. Until then, I encourage everyone to assume positive intent, enjoy a dash of humor, be a good teammate, find a good place to work, and have a very happy Pride Month!